This civilization was born like Egypt and Mesopotamy, of swelling of a large river, here, the average basin of Houang-Ho or Yellow River which it is necessary to channel. The Chinese live in this area since prehistory . At the Xth millenium it appears in the peninsula of Shandong.

In Henan, at the end of the 3rd millenium, the history of China starts. An agricultural economics, (cultures of Yuang-chao in the east and Long Chan in the west), will know its the first three sovereign then the legendary dynasty of Hia or Xia, founded by Yu the Large one. With the whole beginning of XXIIth century, it includes seventeen sovereigns. This dynasty seems to have disappeared after five centuries, because of the corruption, reversed by the vassal ones, led by prince Tang the Victorious one.

The dynasty of Shang

About the XVIIth century before J.C, la first historical dynasty, called Shang (or Yin) is dependent to the discovery of the writing and the apogee of the metallurgy of the bronze, appeared towards - 200, which develops a specialized craft industry and a warlike nobility. It has as a Dayi capital, today Anyiang and is protected by citadels with the walls packed loess as hard as the stone, and uses chariots. Its archers are frightening. They use the composite arc, made up of several layers of flexible materials. Enough runs to be used with horse, it has a long range nevertheless. The catch is particularly effective at the moment of the tension of the arc because of a ring for the inch used by the archers. The war is frequent against the nomads, stockbreeders of goats of the steppes of the interior.

The dynasty of Zhou

In XIth century,  Zhou, semi nomad and vassal of the West, installed in the valley of Wei, directed  by prince Wen, attack the Shang kingdom. They control the use of the chariot whose attachment comprises four horses of face and are accustomed to the war against the barbarians of the steppe. The victory is complete with the battle of Muye, in the north of the Jaune river, and last king Shang, Zhouxin, is decapitated. The dynasty of Zhou or Tcheou is founded. The king carries the title of tianzi "Wire of the Sky", and exerts especially religious functions. The capital is Hao (Xi' year). Central administration appear. The kingdom increases towards the South, to reach the valleys of Huaihe and Yangzijiang.

At the beginning of IXth century, the weakening of Zhou is obvious at the time of the accession to the throne of king Yi, imposed by a coalition of vassal. Under the following reign (878-828), the dynasty is almost reversed. The first attacks of the nomads of the steppe begin towards 822. Towards the beginning of VIIIth century, an invasion of the nomads of North drives out Zhou towards Lo-yang, area where the king depends more on his vassal. The authority of the sovereign disappears for the profit of the seigniories which are formed starting from the fiefs granted to the members of the royal family. A new category of officials, the shi, provide the officers of the army. The external threat constrain to find a head among the vassal ones, whereas the central authority is failing. North, Zeng plays this role, but it is challenged by the kingdoms of the South.

The Spring and Autumns Period

The crumbling is such as several hundreds of "local authorities" coexist. The war becomes soon the traditional mode of relations between these incipient "states", which, possibly allied with non Chinese groups, gather and erase the kingdom of Zhou.

The period is called: "Spring and Autumns" and also Chunqiu, it lasts from - 722 with - 481. Power, until there rested on religious bases, now it is the military aspect which dominates.

Powerful states appear after annexation of next small states:

Jin in current Shanxi
Qin in the North-West
Zhao (Bye), Han and Wei on the territory of the current provinces of Shanxi and Shanxxi
Yan in the area of Peking
Qi and Lu in Shandong
Chu in Hubei
Wu towards the mouth of Yangtse

Qi asserts hegemony while breaking with Zhou (- 667), and imposes an oath of alliance on the other seigniories. The clan heir to Shang, Song, wants to reconstitute the royalty with his profit, but it is beaten by Chu. During these two centuries and half, the number of the significant kingdoms falls and the use of iron modifies the conflicts. In the South, "cruel kingdoms" using the metallurgy of bronze appear.

Warring States Period (- 481- 221) continues this evolution and the seven most powerful Chinese kingdoms are opposed and these centralized administrations (Qin, Qi, Chu, Yan, Zhao, Han and Wei). This period starts with the confrontation of the principal "competitors" Qi, Chu, Han and Wei. But the frontier state of Qin, trained by the vicinity of the barbarians and controlling the manufacture of iron weapons, conquers Western North and East (Chu dominated towards 316), then during the end of the 3rd century eliminate one after the other the states.

IVe century is that of the invention of the crossbow and of the composition of the Art of the war, by Sun Tzu, It is also the beginning of construction the sections of the first Great Wall of China by the kingdoms of North, made with simple pebbles and ground ramparts.

In - 221, the kingdom of Qin being only winner, Qin Shihuang joins together its conquests within the same empire. It launches a series of military offensives in direction of the south. It allots the title of huangdi then, "emperor". The will to make of China a unit state, subjected to the written law, is brutally implemented. The officials manage the country evicting the feudal ones. The opposition of the well-read men confuceans is broken by the destruction of the books. The policy of great public works (unification of the Large Wall) and them loads imposed on the farming community involves a collapse of the empire with died of the emperor. Shaken by the rebellion, the Qin capital, near to current Xian to the hands of an army from risen in - 207 fall. Their head, Liu Bang, take the title of emperor and melt the Western Han dynasty (Xihan), or former (Qianhan) in - 206.

Liu Bang uses the administration installation by Qin, in less rigorous. Han install little by little a doubled powerful central government of an effective local government. They appoint the officials of a very hierarchical administration, on the basis of merit rather than of the birth, following a principle confucean there. The selection and the qualification rest on written examinations.

The threat of the nomads is added to that of feudal which raise the head. It is the emperor Han, Wudi (- 140 - 87) which undertakes the expansion towards the west and the south. In the west, forwardings against the nomads Xiongnu (Huns) and Xianbei, open a breach towards the Central Asia and establish a protectorate on the basin of Tarim, towards what will become the road of silk. They advance to the valley of the Iaxarte river (current Syr-Daria, in Kazakhstan). Wudi must equip its cavalry with horses of Fergana to fight against the nomads. At the end of 2nd front century JC. the south of Mandchourie and most of Korea are conquered, in the same way the kingdoms of Min Yue and Nan Yue (respectively at the south east of China and the northern coast of Vietnam). The island of Hainan becomes Chinese and of the colonies are founded around the delta of the Xi jiang. The capital, Chang' year (current Xian), account 250 000 inhabitants. The wall is extended towards western north. The compass is already invented in the shape of a "magnetic tank" carrying a mobile statue always indicating the south, guided by a bar magnet. 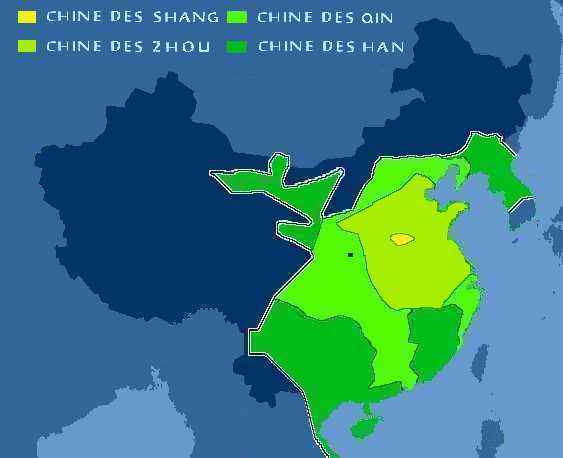 But the conquests of Wudi exhaust the financial reserves of the empire and required unpopular measurements to reinflate the Treasury. The taxes are raised, the restored monopolies of State and the devaluated currency. The sufferings of the peasants are worsened by the demographic growth. The families of land great landowners, defying the tax collectors of the central government, acquire a kind of tax exemption. The burden supported by the rural ones subjected to the tax is done increasingly heavy. The country revolts multiply.

Benefitting from this period of disorders, an ambitious courtier, Wang Mang, deposit the emperor, then child, of which it assumed regency. It creates the transitory dynasty of Xin and tries to restore the authority of the imperial government and to improve the lot of the peasants. It fights in particular against the great exempted properties of taxes. Those are confiscated with the profit of the imperial field and are redistributed with the peasants who cultivated them. Slavery is abolished, the imperial monopolies are reinforced, and of new, benches. But the resistance of the owners is so strong that Wang Mang is constrained to cancel its reform of the lsystem of land tenure. The agrarian crisis worsens in particular in China of North, where a violent country insurrection bursts, of 23 apr.J.-C, directed by the "red Eyebrows". The latter are supported by the great landowners, who take by storm Chang' year and kill the usurper Wang Mang. The Han dynasty is restored.

Prince Liu Xiu (23-55 apr. J-C), become Guang Wudi later, melts the dynasty of Han posterior (Houhan), or Han Eastern (Donghan). Their capital is transferred to Luoyang. In Ier century apr. J-C, China pushes back Xiongnu towards the west. The conquest of the basin of Tarim is completed by the General Ban Chao whose army takes Kasghar in Turkestan. This expansion towards the Caspian Sea is most Western that China knew. Towards 90, Ban Chao conducts a campaign against the Indians of Kushana whose army is led by Kanishka and into 91, inflicts to them a defeat. His son Ban Yong pushes back an attempt at conquest of the basin of Tarim by Koushans of India. The Chinese, who control the road of Silk, develop an active trade with barbarians people of Occident. But pressure of the Qiang tribes in the North-West and fights of factions at the court where children are crowned emperor seriously weaken the empire in second half of the 2nd century. The weakness and the inefficiency of the imperial administration worsens the situation. In 184, after a series of agricultural "catastrophes", two revolts burst, carried out by sects taoists. The first, that of the "yellow Turbans", devastates Shandong and next provinces. The second, the "Company of the five bushels of rice", in Sichuan, is
subdued only into 215 by General Cao Cao. During this time, Xiongnu carry out a return threatening on the borders, towards 196. The General Ts' ao Ts' ao deposits the last Han emperor.

The power is with the hands of local chiefs and empire is divided into 3 kingdoms :

- Wei in north, more populated
- Shu in the west
- Wu in the south

It is the Wei kingdom which only remains and restores an appearance of unit in China towards 265. Tarim is abandoned. The country is ruined, he population decreased by half following the wars between the 3 kingdoms. Each battle is accompanied by the decapitation of tens of thousands of overcome soldiers. The violent fights between the members of the royal family, (war between the Eight Princes), at the end of the 3rd century, benefit the nomads which are installed to keep the boundaries, as will make the Romans with the barbarians.