Nation from Indo-European origin, it is by a migration through Balkans and around the Black Sea, in several waves : Louwites then Nesites it begins its expansion in minor Asia at third millenium. Attracted by wealth of copper and iron ore, they import the horse, new element in this area and are installed on the high plateau of Anatolia, in the loop of Halys by forming autonomous principalities (Nesa, Koushar and Zalpa). They take the name of conquered indigenous people, Hattis.

Hittites are the first to hammer hot iron, towards -1500. They maintain those secret during at least 3 centuries.

In the 19th century, the prince of Koushar, Pithana, conquers Nesa. Anitta, his successor, king of Kussara, then from Kanesh, eliminate the state of Khattouch, beat the king of Hatti, Piyushti and that of Zalpa, Huzzipa and unify minor Asia. This kingdom, which reaches the Mediterranean Sea, has Nisa as capital.

After one period of disorders of succession, Labarna or Labarnas or Tabarna, king of Kussara, considered as the founder of the hittite empire, annexes Taurus, towards -1680. He generalizes the use of the charriot of war appeared at the previous century. The charriot is a powerful weapon for Hittites. It carries a coachman, an attacker and a defender, and not two men as the Egyptians.

The autochtonal elements are integrated under the reign of his son, Hattusili 1st, towards -1650, -1620, who transfer his capital to Hattusa, near the current town of Bogazkale in Turkey, destroyed previously by Anitta. He follows a policy of conquest towards Syria. He captures the cities located between his capital and the Cilician Gate and build fortresses like Mersin with the accesses of the world syro-mesopotamian. He invests Alalah, main port of the area and outlet of Alep on the sea, then takes Urshu and the other allied cities of Alep but does not succeed in taking those latter, the capital of the kingdom of Yamkhad. Nevertheless his border reaches the Mediterranean Sea. Hattusi organizes a campaign in south-west, against Arzawa, a powerful and wide kingdom. The Hurrite power seizes the opportunity to attack in south-east and to annex territories. Hattusi, gives up his attack on Arzawa, and reacts immediately, but he spends two years to retrieve his borders. The following year, the last one of his reign, he opposes to the Hurrites armies supported by troops of Alep, in the North of Syria. He fails and returns seriously wounded, to find a successor who continues the fight.

Disappointed by his three sons, Hattusi adopts finally his grandson Mursili or Murshilish like successor. The first task of Mursili is to avenge death of his predecessor by attacking Alep, which he captures after the Hurrites armies are routed, at the beginning of the 16th century. Allied with Hana, he dominates Syria of north. He undertakes a raid towards Mesopotamy and plunders completely Babylon in -1595. He cannot hold the city under the hurrite pressure. He is assassinated by his brother-in-law Hantili who succeeds him. He builds the highs defensive walls around the capital. Towards -1525, Telepinu is hittite king. The archives of his reign are mentioned in Telepinu’s edict. When he goes up on the throne, his kingdom is reduced to Anatolia central. He consolidates his positions then advances towards Syria of North. He gains several victories in Anti-Taurus and concludes an alliance with the prince from Kizzuwadna, new power established in Cilicy by a dynasty hurrite or Indo-European. He makes write a code of laws, includind strict rules of succession. After his reign, empire breaks down in one period of darkness which covers all the Close East until -1450. Many territories pass under the domination of Hourrites, which create the Kingdom of Mitanni, at the east of Hittites.

Towards -1471, king Hittite Zidardas or Zidanta II pays tribute to the Pharaon Touthmosis III, in exchange of adjustments of borders. Cities and Provinces of Anatolie hittite

Tudhaliya, from -1480, in spite of an invasion of the Gasgas barbarians, ensures a short restoration of the kingdom. He is regarded as the founder of the New Empire, he fights against Mitanni and he detaches Kizzuwadna from it.

Tudhaliya II, king hittite towards - 1450, demolish at the same time Alep and Mitanni. He turns then to the West and undertakes a campaign against Arzawa and Seha, he reaches the Aegean Sea and perhaps he conquers Cyprus. In the North-West, it is probable that he dismantles the confederation which under the name of Assuwa gathers all the small States, but he does not manage however to secure the road check of the North-West which ensured the supply tin, in direction of the mines of the Central Europe.
He directs to the east a campaign against Azzi and Hayasa. His reign is followed from one catastrophic period: the enemies attack on all the sides at the same time and Hattusa is destroyed and burned.

The New Empire maintains good relations with the Pharaon Thoutmosis IV (-1425 -1417) before an episode of decline due to the political disturbances. 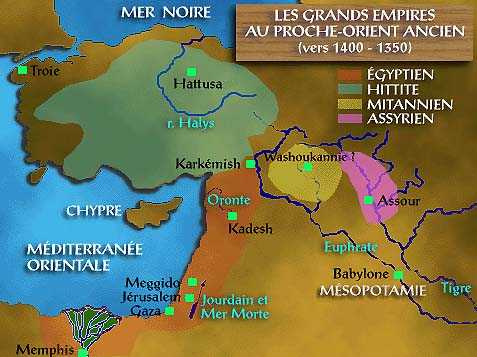 Return in strength of the Hittite empire towards -1380, with Suppiluliuma I which pushes back a new invasion of Gasgas, rebuilt Hattusa, signs a treaty with the Pharaon Amenophis III and takes again the expansion towards Mesopotamy and Syria. His objective is to break alliance between Egypt and Mitanni. He benefits from dynastic disorders in this country and the religious crisis in Egypt (Akhenaton); to install vassal, Mattiwaza, governor of the Western part of Mitanni, creating a buffer state with the expansionist kingdom of Assyria. He dominates Ourartou and captures the cities of the north of Syria : Alep, Amurru, Carchemish and Damas.

The maximum extension of the empire carries the borders of the Zagros Mounts to the East, through Assyria, to the Mediterranean in the West into -1360. Syria of North becomes a protectorate Hittite and the town of Emar is reinforced by a consequent citadel to face the assyrians threats. The hittite power competes with that of Egypt, Assyria and Babylon.

Hittites undergo a defeat against the army of the Pharaon Sethi the first in -1310.

Muwatalli, king hittite (1306-1294 BC) knows the destruction of Hattusa by Gasgas. The imminent danger of which Egypt threatens him, constrained to move his capital towards the South with Tarhuntassa, perhaps not far from the modern city of Karaman. A rapid countryside is necessary to be ensured of the honesty of dubious Arzawa and king Piyamaradu. When it is necessary to make face with the attack of  Ramesses II, the states of the west provide significant quotas to the army hittite. The shock takes place with Kadesh, towards -1290. None of the two powers is victorious.

Urhi-Teshub, son of Muwatalli, succeed to him under the name of Mursili III but he passes the major part of short reigns to fight his uncle Hattusili III. The States of Anatolia Western divide between the two partisans. In 1287, he is deposited and exiled by Hattusili III, brother of Muwatalli. The imminence of the assyrian danger on Euphrate joins together Hattusili and  Ramesses II which conclude a temporary alliance : a treaty towards -1284, confirms control hittite on the North of Syria where the Egyptians give up their claims. Hattusili prepares the marriage of his daughter with  Ramesses II and their meeting at the top in Palestine. He rebuilds Hattusa the capital of the empire hittite, whose temples and files were burned by Gasgas.

End of the Empire

The king assyrien Salmanasar I (towards -1290 -1260) made three campaigns in the area of Diarbekir. He overcomes a coalition linking old Mitanni, Hittites and Arameans and imposes his domination until Karkhemish.

Tudhaliya IV succeeds his father Hattusili III in -1265. He hold peace with the king Shalmaneser and improves the situation with Isuwa and Subartu where a Hittite garrison is installed in Nihiriya. He ensures stability of his empire and maintains good relations with Egypt. But Shamaneser's successor, Tukulti Ninurta 1st did not tolerate any encroachment of the Hittites, whose army was severely beaten by Assyrians, the battle of Nihiriya, at the east to Euphrates towards - 1230. Assyrians controll Isuwa's copper mines, in east of Hittite empire, also Tudhaliya IV invades kingdom of Alashiya, probably in Cyprus, with Syrians' help, where hittite empire takes in supply. Face to Assyrian invasions of Diyarbakir and Alzi, the Hittite king enacts with his ally Sausgamuwa, Amurru's king, maritime economic blockade. The conflict don't erupt, everyone is busy elsewhere. This blockade is even beneficial to Hittites as Assyria accepts a peace treaty and makes territories took in the Carchemish's kingdom. Tudhaliya IV must make significant concessions to Kurunta king of Tarhuntassa who claims the title of Hattusa's sovereign.

At the beginning of XIIth century, Suppiluliumas II, last sovereign of hittite empire, cannot stop his fall in spite of some military successes (He stops Assyrian on Euphrates) and food support of Egypt. The empire turn into quasi-feudal state where a caste of warrior receives from king large areas which become quickly independent fiefs. Hittite empire  is carried off by the Sea People, supported by Gasgas, the Phrygians occupying the center, the loop of Halys. This dark age which follows the Hittite empire's destruction, covers all the area. The principal sites of Anatolia central are forsaken. 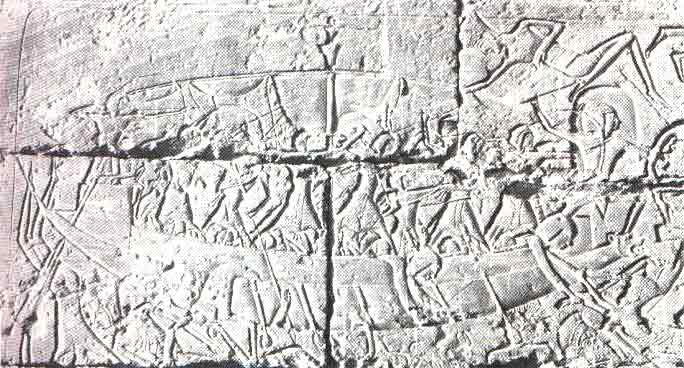 The Hittite empire broke into several kingdoms, the most important are Carchemish called Hatti by the Assyrians, Melida, north loop of the Euphrates and Masuwari the kingdom Til Barsip. Many small neo-Hittite kingdoms were formed in the southwest of Anatolia and northern Syria. In the tenth century, many cities resist to Aramaic infiltration, from Carchemish to Hamath. But the thrust of the Hebrews during the reign of David who submits Hamath to tribute in the ninth century, the aggressive return of Assyrian empire with the destruction of the Aramaic kingdom of Bit Adini and capture of Til Barsip by Shalmaneser III, precipitated the end and integration of all these states in Assyrian empire, about -715

Return in top of page