America is populated since prehistory. From this period, objects were found: jewels, weapons, tools and potteries in constructions of very big size. Many hillocks with religious vocation, are of significant size, going up to 40 meters of height, 200 meters length and 150 meters broad.

In the same way, of the enclosures built like defenses, including a stone wall and a ditch, are enough vast to contain other smaller enclosures, reinforced by defensive hillocks. The gigantic proportions of the found monuments indicate that the population was more numerous than on arrival of Europeans and than civilization was advanced. According to specialists', the history of the primitive man in America begin three thousand five thousand years ago.

The Mesoamerica is a true mosaic of civilizations.

Towards - 1500, begin Olmec civilization (country of rubber), in Mexico, on the coastal plain of the gulf of the same name. Main cities are in the West, San Lorenzo, towards - 1300, the first capital, Laguna of los Cerros and Tres Zapotes and at the East, La Venta (2nd capital) and Villahermosa. This population lives lives on the province of Veracruz and the Tabasco's state modern. This society succeeded, in spite of the absence of stone, to build basalt heads of almost 20 tons. Transport is accomplished by raft on more than 100 kilometers. The presence of other products coming from distant countries indicates a military capacity. They are the inventors of the calendar which the Mayas will improve and the Aztec will use. On the other hand, loneliness is the cause of slowness of technology for example the use of the wheel, widespread since Mesopotamy as far as China , is unknown until the arrival of Europeans. Moreover, they do not have draft animals.

Olmecs built the first systems of hydraulic control of the Mesoamerica, in San Lorenzo and in Venta, with networks of underground canalisations. Their history is badly known. One spoke about a "Olmeque empire", extensive from coast of the Gulf of Mexico, with the central plateau (Tlatilco), by Morelos (Chalcatzingo), Guerrero (Oxtotitlàn), Oaxaca (Monte Alban), Puebla (Tired Bocas) and along the Pacific until the North of Costa Rica (peninsula of Nicoya).

San Lorenzo is destroyed by the war towards - 900 and La Venta undergoes the same fate towards - 600. Olmec culture disappears in the area towards - 200, but is maintained by a migration towards the high plateaus of the Central America until the 12th century. From - 400 to 100 post J-C, no more dominant power ago in the Mesoamerica. 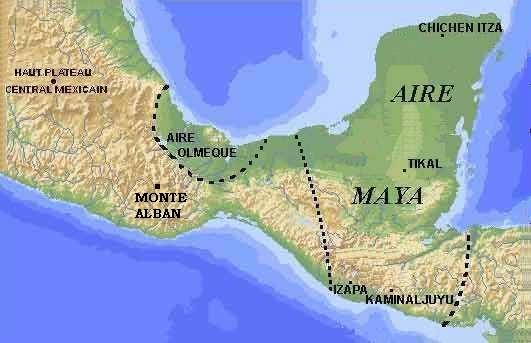 They did not leave us vestiges of the proto-Mayas which preceded them, according to them, since 4th millenium and the culture of corn. One finds their first trace datable towards 300 post J-C in Guatemala.

The Mayas kingdoms are the Olmec civilization heirs and develop starting from Yucatan. They are independent cities, containing a religious and political center, animated mainly the holidays or market-day. The expansion starting from the Lowlands, requires an effective agriculture: irrigation canals and elevated cultivated terraces, to dry too wet earths. The old centers are El Mirador, Cuello then Tikal, Palenque, and tardily Chichen Itza, Uxmal and Mayapan. The movement goes from the mountainous south towards the north of wooded Yucatan. This policy of expansion does not last.

From 7th to 8th century Maya's civilization is in a fast development, but it remains little urbanized. Towards 600, empire of Teotihuacan (city in the north of Mexico City which reached 200 000 inhabitants towards 100 post J-C), collapses in an unexplained way. Tikal becomes the first state-city of the Mesoamerica and account 500 000 inhabitants with back-country.

Their road system is effective and allows the armies to walk in broad column even if it rain. Weapons used are of obsidian for blades, lance, arc and arrows (in reed), atlatl (propellant which multiplies by ten the speed of a lance or a javelin) and the slingshots. 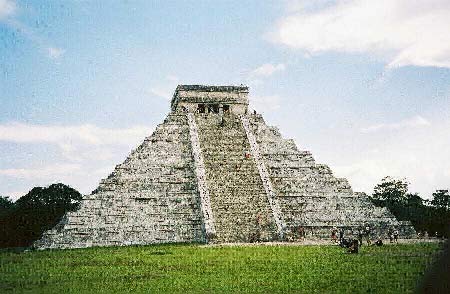 At the end of the 9nd century, the large Maya cities of the south are deserted following an appalling dryness and become an easy prey for the invaders of north like Toltecs. Towards 980, one of their tribe, Itza, fact of Chichen Itza its capital. Maya civilization remains under the toltèque authority. The Maya rebirth starts about the year 1000 and, to the 12nd century, is centered around Mayapan. The domination of this city, true capital of Yucatan at the end of the 13nd century, hard until the 15nd century old middle, then it is the decline of the Mayas

In the Andes cordillera, another civilization takes its rise. As of the 4nd millenium, these men arm themselves with hard stone knives, arcs, daggers and stone axes. The arrowheads are also of hard stone.

Later, they install themselves on the coast and towards - 2500, the techniques of irrigation allow an intensive culture of corn and a beginning of social organization.

Towards - 1300, develops in the north of the white cordillera, a religious center dedicated to God Puma, Chavin de Huantar.

Between - 800 and - 500, Chavin culture extends its influence on its neighbors and does great technical progress in particular in the metallurgy. The technique of bronze is known.

To the 4th century before J-C, the temple chavin is destroyed, without the reasons are known.

It is the center of the Mochica confederation which occupies the coast on 400 km. The war is frequent with the neighbors, in particular with Gallinazo's society of the valley of Viru, on which they earn. The soldiers fight by means of copper axes, of knives and bludgeons, protected by shields and helmets. The class of the warriors is the dominant class.

Thousands of people built gigantic huacas, pyramids with five degrees, similar to those of Saqqarah in Egypt. Town planning is developed, the aqueducts and the canals of irrigation bring the water of the cordillera of the Andes. Agriculture is prosperous. Metallurgy of copper is mastered. The war plays a significant role in the representations of art mochica. The human sacrifice seems closely associated with ritual of warriors and funerary.


Towards the 7th century, this culture disappears by the conjunction from two phenomena. The famine strikes because of the torrential rains which destroy the cultures, the famine installs herself. The expansion of the Huari-Tihuanaco culture their is fatal.

The coastal area of the South of Peru knows one period who is named Proto-Nazca, extending from - 200 to - 100. It is one time of instability due to the arrival of new populations.

Between 400 and 900 post J-C, as the Mochica culture, the regional cultures develop in the south. Among them, on the southern coast, one finds the Nazca culture whose villages are installed along the rivers in the fertile valleys. Cahuachi is most significant, to 6 km in the South of the modern city of Nazca and which seems to have been the capital. The geometrical figures, called geoglyphes, visible only of plane, required at the same time good knowledge in geometry, but also an excellent organization to remove thousands of tons of stones.

At the 5th century post J-C, in the south of the Sierra, close to the lake Titicaca (to 4000 m of altitude), in current Bolivia, emerges the Tiahuanaco culture, able to build temples in large blocks of stone tied between them by copper tenons.

Between 600 and 1000, the culture Huari or Wari, develops close to the modern city of Ayacucho, where Huari was, the capital of the empire. In fact, this warlike and expansionist culture lasts more than 1000 years. In 1000, the Huari culture collapses.

In north, the Lambayeque culture whose capital is Batan Grande (near to Chiclayo) appears. Owing to floods, the capital is abandoned for Tucume, famous for its pyramids in adobe (clay dried with the sun and mixed with straw, which supply bricks known as "raw bricks"). The expansion of the sovereign of Chan Chàn, the capital of the Chimù kingdom, dominates this culture, in the middle of the 13th century.